Choosing the right computer for your small business 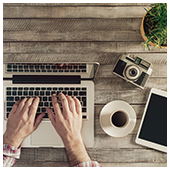 With the rise of eCommerce and remote working, the importance of computers in business has never been more apparent. But what kind of computers does your small business need? Should you invest in desktops or laptops? Consider the following when weighing your options.

The pandemic has driven the majority of businesses to adopt remote work setups. If your business will implement a similar arrangement, investing in laptops is the smart move, as your staff can easily take their device with them anywhere they want to work. However, there may be instances when this can turn out to be counterproductive: if your employees can jump into work mode easily, they may get the impression that they have to work 24/7.

As such, you must not discount desktops altogether. While laptops are light and portable, modern desktop computers aren’t nearly as immobile as they used to be. In many cases, desktop screens are thin and light, and all-in-one desktops are easy to move around.

Before, desktop computers had more memory than laptops, and they were faster because they had bigger processors. This has now changed, thanks to improvements in laptop technology. But until high-powered laptops become affordable to the general public, desktop computers are going to provide your business with more memory, speed, and power for your money.

How much speed and memory you need depends on the work you do. If your employees’ work mostly entails word processing and emailing, laptops should be enough. But if they need to run gaming software or access heavy media files, better invest in desktops.

A desktop computer is more physically secure because it’s often kept in one location, making it easier to guard. And because a desktop’s internet access is often a single source (whether through Wi-Fi or cable), it’s easier to defend it against malware and cyberattacks.

If you choose to invest in laptops, make sure to have strict policies on how to protect devices that are used outside of the office. Don’t let your staff connect to unsecured networks, and use encryption tools to protect data from unauthorized access. You must also employ mobile device management software to enable your administrator to wipe data clean off laptops should they get lost or stolen.

Laptops, especially the smaller notebook-style ones, are a lot cheaper than desktops. However, desktop computers are also becoming more affordable through local channels and lenient payment terms. And with a capable IT services provider that can provide you with infrastructure or offer cheaper desktop options, cost probably won’t be a deciding factor.

Although laptop computers provide the convenience of portability, they’re prone to battery and charging cord problems. They are also easily damaged, especially if they are dropped or mishandled. By contrast, desktops are generally sturdier. But when they do experience a problem, repairing them can be expensive.

The desktop versus laptop debate is an old one, with supporters on both sides touting the advantages of their choice. A growing company usually needs a combination of both types of computers, especially as their needs evolve.

If you have questions regarding choosing the best computer for your company, give us a call. We’ll be happy to assist you in improving your business.