Should you fear government surveillance? 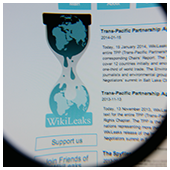 Accusations of inappropriate government surveillance have been swirling after Wikileaks recently released thousands of pages supposedly detailing the CIA’s exploitation of compromised devices and applications. But in today’s climate, every headline needs to be taken with a grain of salt. Read on to find out what’s actually at stake and why you probably don’t need to worry.

What devices and apps are supposedly vulnerable?

Wikileaks labeled its ongoing release of 8,761 classified CIA documents “Year Zero.” Nestled among those files are tools and correspondence that explain how operatives could snoop on communications, downloads, and browsing history. Here is a list of the “affected” applications and hardware:

Those are some very big names, right? Thankfully, it’s mostly hyperbole. The reality of the situation isn’t nearly as bad as it sounds.

Two considerations before freaking out

First, almost all these exploits require physical access to devices before anything can be compromised. For example, news organizations repeatedly reported that WhatsApp, Signal, Telegram and Confide all had encryption protocols that had been subverted by the CIA. That is 100% false.

What the documents actually revealed is that the CIA was aware of security gaps in Windows, iOS, Android and Samsung’s Tizen OS, which allowed the agency to snoop on messages before they were encrypted. Messages sent in these apps are still totally uncrackable as long as the devices they are installed on haven’t been physically compromised.

Takeaway #1: Physical security is still one of the most important aspects of cyber security. Most data security regulations require certain physical security protocols as a deterrent to breaches that take place via theft of social engineering -- and for good reason.

The second reason not to worry is the hardware devices and operating systems that supposedly left encrypted messages vulnerable haven’t been sold for a long time. For example, only Samsung TVs from before 2013 were vulnerable to the always-on microphone bug -- which was patched in an OS update years ago.

But what about iOS -- surely that’s the scariest reveal of them all, right? Not quite. Only the iPhone 3G, discontinued in 2010, was susceptible to exploitation. Furthermore, Apple immediately responded that they were aware of this vulnerability and patched it in the version of iOS that was released in 2011.

Takeaway #2: Updating software is critical to keeping your data safe. As we saw in the Year Zero leaks, just one piece of outdated software can cause a domino effect of other vulnerabilities.

In reality, the most recent Wikileaks releases shouldn’t change your approach to cyber security at all. As long as you consider data security a never-ending battle, you’ll be safer than everyone too lazy or forgetful to lock up their server rooms or update their operating system.

But running a business doesn’t always leave you a lot of time for fighting a “never-ending battle,” does it? Fortunately, that’s exactly what we do for our clients every single day. To find out more about how we can keep you safe, call today.