What is the difference between an IDS and an IPS?

You may have heard of the terms intrusion detection system (IDS) and intrusion prevention system (IPS) when setting up your cybersecurity. For most non-IT folks, both terms sound similar, but there’s an important distinction between the two.

The main difference is that an IDS monitors network activities, while an IPS controls traffic. Together, these solutions can help guard against increasingly complex cyberthreats facing businesses today. They are essential tools in any in-house or managed security operations center (SOC), and may also be deployed together as part of a unified threat management (UTM) system.

Although there is considerable crossover between the functions of an IDS and an IPS, they’re not quite the same thing. It doesn’t help that IT professionals themselves don’t agree unanimously on the exact definitions, either. The easiest way to think of IDS and IPS are as systems that work together to provide alerts and responses respectively. After all, there’s not much point in having an alarm if there’s no established way to stop an attack in progress.

What is an intrusion detection system

An IDS continuously monitors network traffic for potentially malicious activities like violations of security policy or suspicious packets of data. IDS relies on signature-based detection or anomaly-based detection, or both.

An IDS may protect an entire network or a specific device. A network IDS is the most common type, since it takes a scalable and centrally managed approach to protecting an organization’s entire IT portfolio. It’s often installed alongside a network firewall, whereas a host-based IDS is installed on a single computer or device.

Anomaly-based systems are typically more effective than signature-based ones. Signature-based detection only works with known threats by comparing network activities with a database of suspicious activities. However, anomaly-based detection uses a model of normal behavior, as defined by the organization running it. If anything happens outside the established norm, it will send an alert, giving administrators the chance to evaluate the possible threat. AI and machine learning are especially important in these systems.

What is an intrusion prevention system?

Intrusion prevention can be considered a subset of intrusion detection. After all, preventive measures can only be applied after the detection of a potential threat. IDS and IPS are similar in the way they’re deployed and operated and may be installed on the network level or on individual devices. They can also be signature- or anomaly-based. Most enterprises opt for an anomaly-based, network-level IPS for comprehensive security and easier management.

An IPS proactively blocks suspicious data packets in much the same way that a firewall blocks blacklisted or suspicious IP addresses. With anomaly-based intrusion prevention, suspicious activities may be blocked based on deviations from baseline normal behaviors that have been pre-programmed by the vendor, as well as those caught later on after the configuration phase.

The only significant drawback of an IPS is that it can sometimes block legitimate activities. These so-called false positives can get in the way of important business operations. An IDS detection can also yield false positives, but instead of these being automatically blocked, they can be reviewed by administrators first. Fortunately, false positives can be reduced to a minimum through proper configuration, but it’s still important to have a human input as well in any SOC.

Why you need both

In most cases, intrusion detection and prevention are configurable components of a connected system that work together with other measures like network firewalls and antivirus controls. These unified solutions help counter the ever-growing list of security threats, while reducing the burden on your team with automated policy enforcement.

Both systems are essential for protecting any business network, especially those accessed by remote workers and branches. With a managed solution, organizations can set up a wide area network (WAN) to consolidate all networked resources before applying intrusion detection and prevention across the entire perimeter.

outsourceIT provides the full range of managed security solutions you need to protect your business from cyberthreats. Contact us now to schedule your first strategy session. 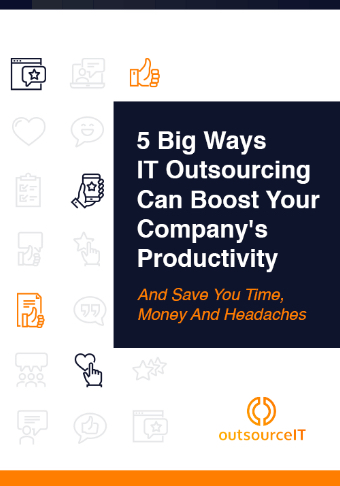